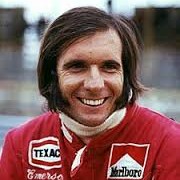 Emerson Fittipaldi born December 12, 1946) is a semi-retired Brazilian automobile racing driver who won both the Formula One World Championship and the Indianapolis 500 twice each and the CART championship once.

When aged 14, Fittipaldi was racing motorcycles, and when aged 16, hydrofoils. While racing one day, his brother Wilson took off at 70 mph (110 km/h) and landed upside down. Afterwards, they both decided that although he had survived, they would no longer race hydrofoils and moved onto racing karts.

The pair moved to racing Formula Vees, and built up a company with their parents. In his second season in single-seaters, Fittipaldi won the Brazilian Formula Vee title at 21 years old. He left for Europe in 1969, with the ambition to convince team owners of his talent in three months. After some podiums and his first victories in Formula Ford, Fittipaldi was first trained and then subsequently engaged by the Jim Russell Driving School Formula Three team. He won nine F3 races on the Jim Russell Lotus 59 in the MCD Lombard Championship to become the 1969 champion.

Formula Two
For 1970, Fittipaldi moved up to F2 by joining the Lotus semi-works Team Bardahl campaigning Lotus 59B. With six finishes in the points and four on the podium, he ended the 8 race season in the 3rd place behind Clay Regazzoni and Derek Bell. While this result was very impressive for the newcomer to the series, the spotlight of the year was drawn on Fittipaldi because of his activities in Formula One instead.

Fittipaldi driving the Lotus 72 at the Nürburgring in 1971.
Based on the success of Cosworth DFV and Lotus 49/49B in 1968, Team Lotus was enjoying the reputation as one of the top F1 teams with the inflow of sponsorship money, and Colin Chapman used the 3rd seat on the team for championship races as the testing ground for younger drivers. This was in contrast to the team’s tradition to use non-championship F1 events for the purpose.

The third seat was given to Alex Soler-Roig in the early 1970, and then to Fittipaldi starting with the British GP in July, with Jochen Rindt and John Miles as the regular seat holders. Fittipaldi scored a fourth place as the No.3 driver at the next German GP where the No.1 Jochen Rindt won, and the No.2 John Miles retired.

Team Lotus plans for the season drastically changed when Jochen Rindt was killed at Monza in September and became the only driver to win the championship posthumously. John Miles also left the team, and Fittipaldi was promoted to be the Lotus No.1 driver on his fifth F1 race at the United States GP with Reine Wisell and Pete Lovely as the teammates. Fittipaldi proved up to the task and won this first post-Rindt race for Lotus.

In his first full year as Lotus’ lead driver in 1971, Fittipaldi finished sixth in the drivers’ championship as the team further developed the previous season’s Lotus 72. Armed with what was arguably the greatest Formula one design of all time, the Lotus 72D, Fittipaldi proved dominant in 1972 as he won five of 11 races and easily won the F1 Drivers’ Championship from Jackie Stewart by 16 points. At 25 he was then the youngest champion in F1 history. It appeared he might do it again in 1973. But after three wins from four attempts with the 72D, he began to struggle in the new 72E that was unveiled mid-year. It resulted in the reverse of the previous year, Stewart beating Fittipaldi for the Drivers Championship by 16 points; though the combination of the 72D and E’s points earnings were enough to gain Team Lotus the 1973 F1 Manufacturers Championship.

Fittipaldi in the McLaren M23 in the 1974 Race of Champions at Brands Hatch.

Fittipaldi driving for his brother’s eponymous team at the 1976 Brazilian Grand Prix at his home circuit, Interlagos.
Fittipaldi left Lotus to sign with the promising McLaren team. Driving the highly efficient McLaren M23, he had three victories in 1974, reached the podium four other times, and beat out Clay Regazzoni in a close battle for his second championship. The following season, he notched two more victories and four other podiums, but was second to a dominant Niki Lauda. However, at the height of his F1 success, Fittipaldi shocked everyone by leaving McLaren to race for older brother Wilson Fittipaldi’s Copersucar-sponsored Fittipaldi Automotive team.

It was hardly a world-class organization and the double champion regularly struggled, failing to qualify in three races in his time there. Despite this, he remained with the team for five seasons but only managed a best finish of second. Emerson Fittipaldi decided to retire from racing at the end of 1980. He has since said that his last two years in Formula One were very unhappy: “I was too involved in the problems of trying to make the team work, and I neglected my marriage and my personal life”, although at the time he cited the deaths of many of his colleagues as his reason. He was only 33, but had been racing in Formula One for a decade. He had failed to finish seven of the last ten races that year and had several times been outpaced by his Finnish teammate Keke Rosberg (a future champion himself). He moved into the management of the team alongside his brother. The team struggled on for another two years with minimal sponsorship, going into receivership at the end of 1982.