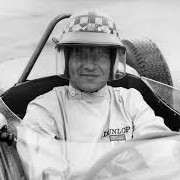 Robert McGregor Innes Ireland (12 June 1930 – 22 October 1993), was a British military officer, engineer, and motor racing driver. He was a larger-than-life character who, according to a rival team boss, “lived without sense, without an analyst and provoked astonishment and affection from everyone.”

Ireland’s first serious year of auto racing was 1957, by which time he was running a small engineering firm in Surrey. Success in sports car racing saw him make his Formula One debut for Team Lotus in 1959. In 1960 he won three non-championship Formula One races and finished fourth in the World Drivers Championship. Badly injured in the 1961 Monaco Grand Prix, Ireland recovered to win the Solitude Grand Prix and Flugplatzrennen races, then finished the season with a victory in the United States Grand Prix at Watkins Glen.

Despite these successes, he was sacked at the end of the season, team boss Colin Chapman considering Jim Clark a better bet going forward. Despite occasional successes, Ireland never again had a car to match his talent, and his last serious race was the Daytona 500 in 1967.

A talented writer, Ireland produced a classic autobiography, All Arms and Elbows (ISBN 0-85184-050-7), and worked as a journalist for the American Road & Track magazine, as well as skippering fishing trawlers in the North Atlantic. Towards the end of his life, he was elected president of the prestigious British Racing Drivers’ Club, which post he still held at the time of his death from cancer on 22 October 1993, at Reading, Berkshire, England.