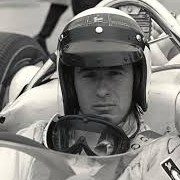 Sir John Young “Jackie” Stewart, OBE[2] (born 11 June 1939) is a British former Formula One racing driver from Scotland. Nicknamed the “Flying Scot”, he competed in Formula One between 1965 and 1973, winning three World Drivers’ Championships. He also competed in Can-Am. In 2009 he was ranked fifth of the fifty greatest Formula One drivers of all time by journalist Kevin Eason who wrote: “He has not only emerged as a great driver, but one of the greatest figures of motor racing.”

In 1964 he drove in Formula Three for Tyrrell. His debut, in the wet at Snetterton on 15 March, was dominant, taking an astounding 25 second lead in just two laps before coasting home to a win on a 44 second cushion. Within days, he was offered a Formula One ride with Cooper, but declined, preferring to gain experience under Tyrrell; he failed to win just two races (one to clutch failure, one to a spin) in becoming F3 champion.

After running John Coombs’ E-type and practising in a Ferrari at Le Mans, he took a trial in an F1 Lotus 33-Climax, in which he impressed Colin Chapman and Jim Clark. Stewart again refused a ride in F1, but went instead to the Lotus Formula Two team. In his F2 debut, he was second at the difficult Clermont-Ferrand circuit in a Lotus 32-Cosworth.

While he signed with BRM alongside Graham Hill in 1965, a contract which netted him £4,000, his first race in an F1 car was for Lotus, as stand-in for an injured Clark, at the Rand Grand Prix in December 1964; the Lotus broke in the first heat, but he won the second. On his F1 debut in South Africa, he scored his first Championship point, finishing sixth. His first major competition victory came in the BRDC International Trophy in the late spring, and before the end of the year he won his first World Championship race at Monza, fighting wheel-to-wheel with teammate Hill’s P261. Stewart finished his rookie season with three seconds, a third, a fifth, and a sixth, and third place in the World Drivers’ Championship. He also piloted Tyrrell’s unsuccessful F2 Cooper T75-BRM, and ran the Rover Company’s revolutionary turbine car at Le Mans.

1966 saw him almost win the Indianapolis 500 on his first attempt, in John Mecom’s Lola T90-Ford, only to be denied by a broken scavenge pump while leading by over a lap with eight laps to go; however, Stewart’s performance, having had the race fully in hand and sidelined only by mechanical failure, won him Rookie of the Year honours despite the winner, Graham Hill, also being an Indianapolis rookie. At the start of the 1966 season, Stewart won the Australasian 8 round championship from his BRM teammate Graham Hill in 2 litre BRMs and also raced closely with his great rival and friend Jim Clark who was somewhat disadvantaged by an unreliable Lotus 39 which was let down by old Climax 2.5s.

Also, in 1966, a crash triggered his fight for improved safety in racing. On lap one of the 1966 Belgian Grand Prix at Spa-Francorchamps, when sudden rain caused many crashes, he found himself trapped in his overturned BRM, getting soaked by leaking fuel, which can result in a fire. The marshals had no tools to help him, and it took his teammate Hill and Bob Bondurant, who had also crashed nearby, to get him out after borrowing a spanner from a spectator’s car. Since then, a main switch to disconnect electrics and a removable steering wheel have become standard. Also, noticing the long and slow transport to a hospital, he brought his own doctor to future races, while BRM supplied a medical truck for the benefit of all. Stewart also began to keep a spanner taped to his steering wheel. It was a poor year all around; the BRMs were notoriously unreliable, although Stewart did win the Monaco Grand Prix. Stewart had some success in other forms of racing during the year, winning the 1966 Tasman Series and the 1966 Rothmans 12 Hour International Sports Car Race.

BRM’s fortunes did not improve in 1967, despite closely contesting the Tasman championship with Jim Clark who in a Lotus 33 probably raced closer and harder with Jackie than at any time in their careers. While Clark usually won, Stewart won a classic victory in the NZGP with Clark attempting to run him down in the last laps with bodywork flying off the 33. Stewart came no higher than second at Spa, though he won F2 events for Tyrrell at Karlskoga, Enna, Oulton Park, and Albi in a Matra MS5 or MS7. He also placed 2nd driving a works-entered Ferrari driving with Chris Amon at the BOAC 6 Hours at Brands Hatch, the 10th round of World Sportscar Championship at the time.

Stewart also did the 1967 National 500 NASCAR race but diden’t qualify for the race.

In Formula One, he switched to Tyrrell’s Matra International team, where he drove a Matra MS10-Cosworth for the 1968 and 1969 seasons. Skill (and improving tyres from Dunlop) brought a win in heavy rain at Zandvoort. Another win in rain and fog at the Nürburgring, where he won by a margin of four minutes. He also won at Watkins Glen, but missed Jarama and Monaco due to an F2 injury at Jarama. His car failed at Mexico City, and so lost the driving title to Hill.

In 1969, Stewart had a number of races where he completely dominated the opposition, such as winning by over 2 laps at Montjuïc, a whole minute at Clemont-Ferrand and more than a lap at Silverstone. With additional wins at Kyalami, Zandvoort, and Monza, Stewart became world champion in 1969 in a Matra MS80-Cosworth. Until September 2005, when Fernando Alonso in a Renault became champion, he was the only driver to have won the championship driving for a French marque and, as Alonso’s Renault was built in the UK, Stewart remains the only driver to win the world championship in a French-built car.

For 1970, Matra insisted on using their own V12 engines, while Tyrrell and Stewart wanted to keep the Cosworths as well as the good connection to Ford. As a consequence, the Tyrrell team bought a chassis from March Engineering; Stewart took the March 701-Cosworth[8] to wins at the Daily Mail Race of Champions and Jarama, but was soon overcome by Lotus’ new 72. The new Tyrrell 001-Cosworth, appearing in August,[8] suffered problems, but Stewart saw better days for it in 1971, and stayed on. Tyrrell continued to be sponsored by French fuel company Elf, and Stewart raced in a car painted French Racing Blue for many years. Stewart also continued to race sporadically in Formula Two, winning at the Crystal Palace and placing at Thruxton. A projected Le Mans appearance, to co-drive the 4.5 litre Porsche 917K with Steve McQueen, did not come off, for McQueen’s inability to get insurance. He also raced Can-Am, in the revolutionary Chaparral 2J. Stewart achieved pole position in 2 events, ahead of the dominant McLarens, but the chronic unreliability of the 2J prevented Stewart from finishing any races.

Stewart went on to win the Formula One world championship in 1971 using the excellent Tyrrell 003-Cosworth, winning Spain, Monaco, France, Britain, Germany, and Canada. He also did a full season in Can-Am, driving a Carl Haas sponsored Lola T260-Chevrolet. and again in 1973. During the 1971 Can-Am series, Stewart was the only driver able to challenge the McLarens driven by Dennis Hulme and Peter Revson. Stewart won 2 races; at Mont Tremblant and Mid Ohio. Stewart finished 3rd in the 1971 Can-Am Drivers Championship. The stress of racing year round, and on several continents eventually caused medical problems for Stewart. During the 1972 Grand Prix season he missed the Belgian Grand Prix at Nivelles due to gastritis, and had to cancel plans to drive a Can-Am McLaren, but won the Argentine, French, U.S., and Canadian Grands Prix, to come second to Emerson Fittipaldi in the drivers’ standings. Stewart also competed in a Ford Capri RS2600 in the European Touring Car Championship, with F1 teammate François Cevert and other F1 pilots, at a time where the competition between Ford and BMW was at a height. Stewart shared a Capri with F1 Tyrrell teammate François Cevert in the 1972 6 hours of Paul Ricard, finishing second. He also received an OBE.

Entering the 1973 season, Stewart had decided to retire. He nevertheless won at South Africa, Belgium, Monaco, Holland, and Austria. His last (and then record-setting) 27th victory came at the Nürburgring with a convincing 1–2 for Tyrrell. “Nothing gave me more satisfaction than to win at the Nürburgring and yet, I was always afraid.” Stewart later said. “When I left home for the German Grand Prix I always used to pause at the end of the driveway and take a long look back. I was never sure I’d come home again.” After the fatal crash of his teammate François Cevert in practice for the 1973 United States Grand Prix at Watkins Glen, Stewart retired one race earlier than intended and missed what would have been his 100th Grand Prix. Nevertheless, Stewart still won the drivers’ championship for the year.