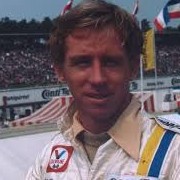 Although he considers himself to be an single-seater driver, Schuppan’s biggest career victory was with the factory backed Rothmans Porsche team when he partnered Americans Hurley Haywood and Al Holbert to win the 1983 24 Hours of Le Mans driving the iconic Porsche 956.

After a successful karting career in which he won numerous Australian state and national titles, Schuppan made the decision to pursue a career in motor racing. He and his wife Jennifer ventured to Great Britain (with a self-imposed 2 year limit of making it big) to allow him to participate in the British Formula Atlantic Championship, which he won, leading to a test with BRM. As BRM’s test driver he qualified for the 1972 Belgian Grand Prix at Nivelles-Baulers, but he did not start the race because team mate Helmut Marko commandeered his car, though he did compete in some non-championship races with BRM.

In 1974 Schuppan went to Team Ensign, débuting again in the Belgian Grand Prix where he finished in 15th position. In Monaco he retired on lap four because of an accident. Schuppan was disqualified in both Sweden and the Netherlands; in Sweden because he started illegally from 26th place on the grid and in the Netherlands for receiving a tyre change outside of the pits. Schuppan failed to qualify in France or Britain. He retired in Germany on lap four because of gearbox problems.

In 1975 he raced in one race in Sweden for Embassy Racing With Graham Hill team, retiring from the race with transmission problems. In 1977 Schuppan raced for Surtees, finishing 12th in Britain and a career best seventh in Germany. He finished 16th in Austria, but failed to qualify for his final Formula One race in the Netherlands. Schuppan would later describe Surtees team boss, 1964 World Champion John Surtees, as an autocratic owner who “always knew best and wouldn’t listen to his drivers” and believes his time with the team was hampered by not being given equal equipment to his team mate Vittorio Brambilla.