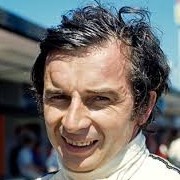 Jean-Pierre Maurice Georges Beltoise (26 April 1937 – 5 January 2015) was a Grand Prix motorcycle road racer and Formula One driver who raced for the Matra and BRM teams. François Cevert was his brother-in-law (his wife’s brother). He competed in 88 Grands Prix achieving one win and eight podium finishes.

In 1966, Beltoise drove in the German Grand Prix at the Nurburgring in a Formula Two (F2) one litre Matra MS5-Cosworth. He finished one lap down but won the F2 class. However, it was his only Grand Prix that season. In 1967 Beltoise competed in three Grands Prix with a Formula Two Matra MS7 1.6 litre Cosworth, and finished seventh at both Watkins Glen and Mexico City. He also won the 1967 Buenos Aires Grand Prix, which was not part of the World Championship calendar. In 1968 Beltoise began the season again with an F2 car but from the second race onward had Formula One machinery and finished second in the 1968 Dutch Grand Prix. In 1969 he was placed in Ken Tyrrell’s Matra team, whilst the works V12 engine was developed[3] driving alongside Jackie Stewart, and finished second in the French grand Prix. Beltoise returned to the works Matra team for both 1970 and 1971. In 1971, racing in the Matra sports car team, he was involved in the accident in which Ignazio Giunti died during the 1000 km Buenos Aires, and his international racing license was suspended for some time.

In 1971 Matra signed Chris Amon as team leader which frustrated Beltoise’s ambitions. For 1972 he moved to the BRM team and won what turned out to be his only and BRM’s final Formula One victory at the 1972 Monaco Grand Prix in heavy rain. He spent three seasons with BRM, without much success and finally retired from Formula 1 at the end of the 1974 season.