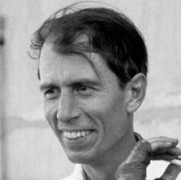 John Cooper Fitch (August 4, 1917 – October 31, 2012) was a United States racecar driver and inventor. He was the first American to race automobiles successfully in Europe in the postwar era.[citation needed]

In the course of a driving career which spanned 18 years, Fitch won such notable sports car races as the 1951 Argentine Grand Prix, 1955 Mille Miglia (production car class), RAC Tourist Trophy, and 12 Hours of Sebring as well as numerous lesser races. He also competed in the 24 Hours of Le Mans six times, finishing as high as third. Fitch also served as the first manager for Chevrolet’s Corvette racing team, and the first general manager of the Lime Rock Park race track, where he organized (and drove in) a famous Formula Libre race in 1959, where Rodger Ward shocked the expensive and exotic sports cars by beating them on the road course in an Offenhauser powered midget car, normally considered competitive for oval tracks only.

In addition, Fitch emulated his ancestor, John Fitch, one of the inventors of the steamship, by inventing many safety innovations for the race track and the highway, as well as designing and building high performance cars, including modifying Corvairs for resale.

Fitch was active in crusading for increased safety on racetracks and highways, joining with medical experts such as Steve Olvey and Terry Trammel, engineers such as Bill Milliken and Karl Ludvigsen, and journalists such as Chris Economaki and Brock Yates, as well as many of his racing driver friends. He served as consultant to numerous research and governmental organizations on the subject of vehicle handling and dynamics, as they relate to safety. He also served as technical consultant for the film The Racers and design consultant for many racetracks, including Mosport, St. Jovite, and Watkins Glen International, as well as Lime Rock Park.