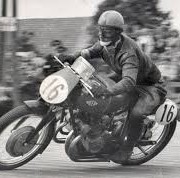 Cirillo “Nello” Pagani (11 October 1911 – 19 October 2003) was an Italian Grand Prix motorcycle road racer and Formula One driver. He was born in Milan, Lombardy, and died in Bresso.

He was known for his long career, spanning from 1928 to 1955, and for becoming the first 125cc World Champion in the inaugural 1949 campaign. He almost became a double Champion in that first year of the World Championship series. In the 500cc class he was officially runner-up. The series was run over six rounds with a rider’s best three scores counting towards the championship. Englishman Les Graham on an AJS was Pagani’s main rival. Although Pagani scored more overall points than Graham, he lost the championship with two wins and a third place as his scores that counted, whilst Graham had two wins and a second.

Pagani’s car racing exploits resulted in wins at the Pau Grand Prix in 1947 and 1948, before his single Formula One World Championship Grand Prix, on 4 June 1950, in the 1950 Swiss Grand Prix at Bremgarten. He finished seventh and scored no championship points. He also finished fourth in the Modena Grand Prix that year, driving a Simca-Gordini.