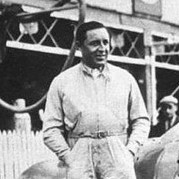 Jean Bugatti, son of Bugatti founder Ettore Bugatti, hired Pierre Veyron in 1932 as a test driver and development engineer. Veyron entered races as a Bugatti company driver, winning many including the 1933 and 1934 Berlin Avus races while driving a Bugatti Type 51A. Veyron’s most significant race victory was his 1939 win at the 24 Hours of Le Mans, co-driving a Bugatti Type 57S Tank with Jean-Pierre Wimille.

During World War II, Veyron joined the French Resistance against German occupation. For his service during the war, the Republic of France awarded him the Legion of Honour in 1945.

After the war, Veyron continued racing, but his main focus was on his family and his oil-drilling technology company. Veyron died in Èze, France in 1970.