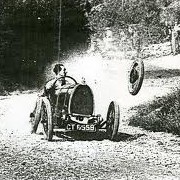 Mays was one of the principal people behind the development of the motor racing stables of English Racing Automobiles (ERA) and British Racing Motors (BRM). The workshops of each firm were established, in turn, in The Maltings adjacent to the Spalding road, behind “Eastgate House” the family home on Eastgate road in Bourne, His lifelong ambition was to see his country succeed at the top level of international motor sport. This ambition was not always matched by his technical or financial resources and a low point was reached with the failure of the BRM V16 project, before BRM won the Constructors’ World Championship in 1962.

Mays raced for some thirty years, competing in various cars: a Speed-model 1½ litre Hillman,[2] two 1½ litre Bugattis, an unsuccessful supercharged AC, the Vauxhall-Villiers, Mercedes, Invictas, Rileys and ERAs.[4] Mays was renowned for competing at Shelsley Walsh, racing there in the early 1920s with a pair of Brescia Bugattis, known as ‘Cordon Bleu’ and ‘Cordon Rouge’. A famous picture was taken of ‘Cordon Bleu’ at the Caerphilly mountain hill-climb in 1924 showing a rear wheel escaping from the car with the driver looking at it over his shoulder. He developed his cars with superchargers through Amherst Villiers and this association continued from AC to the Vauxhall-Villiers and then the famous ‘White Riley’, that eventually became the starting point for ERA.

In 1929 Raymond Mays entered the Vauxhall-Villiers at Shelsley Walsh fitted with twin rear wheels; according to Mays “the first time that any car had competed at any hill climb so equipped.” He broke the hill record and this innovation was widely copied in the years to come.

Mays made his mark on the track in such events as the 1935 German Grand Prix (scene of a famous victory of Tazio Nuvolari), sharing his ERA with Ernst von Delius. The ribbon which came with the wreath which was part of the prize for this event is to be seen at the Raymond Mays room in Bourne Heritage Centre.

In the 1950s and 1960s Mays produced and marketed tuning equipment for British Ford four- and six-cylinder engines, including an alloy cylinder head designed by Mays’s ERA and BRM associate Peter Berthon. These parts were fitted to Ford, A.C., and Reliant cars. Mays described these events and others to Roy Plomley in Desert Island Discs on 25 October 1969.