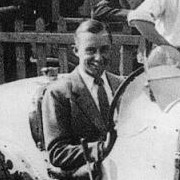 Driving career
Driving Maseratis, Ferraris, Delahayes, and Bugattis against some of the greatest drivers of all time, Dreyfus won 36 races across Europe, including Monaco, Florence, Rheims, Belgium, Cork, Dieppe, Pau, and at Tripoli in North Africa, becoming a French national hero.

He acquired a Bugatti and joined the Moto Club de Nice for younger competitive automotive enthusiasts. In 1924 he won his class in the first amateur race he entered, being the only entrant in the class, and went on to win three consecutive French Riviera championships in the next five years. In 1929 he entered his first professional race, the inaugural Grand Prix of Monaco, finishing first in his class and fifth overall.

René Dreyfus in a Maserati 26M at the Nîmes Grand Prix in 1932
The following year he won the race outright in a Bugatti, beating by 22 seconds the highly regarded Bugatti factory team, led by William Grover-Williams, winner of the previous year, and Louis Chiron. Realizing that factory cars were always faster than the cars owned by private entrants, Dreyfus reasoned that his only chance of winning lay in avoiding refueling stops, so he had additional fuel tanks added to his car with the intent of running the race without stop. This was not common practice at the time, since it was felt that fatigue would make it impossible, but Dreyfus’ strategy proved correct.

Dreyfus traveled to the U.S. and attempted to qualify for the 1940 Indianapolis 500. He did not make the field, but drove two stints of relief for driver René Le Bègue.

The next few years saw Grand Prix racing become a metaphor for war, as the Nazi government of Germany chose this arena to prove their inherent superiority, nationalized the Mercedes-Benz and Auto Union racing teams, and ran them like a military campaign. This led to a remarkable era of competition. While many of the best European drivers of the era, for instance Chiron, were hired by the German teams and jumped at the chance to drive the most advanced cars available, as a Jew this option was not available to Dreyfus. Instead he, like the few other underdogs competing against the German teams, had to defend his nation’s pride by dint of heroic skill and daring in inferior machinery. Although France had been the birthplace of automobile racing, it now was a distant third in the racing hierarchy, behind the all-consuming German onslaught and the perennially victorious Italians.