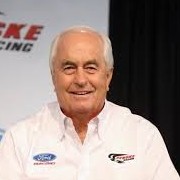 Roger S. Penske (born February 20, 1937) is the owner of the automobile racing team Team Penske, the Penske Corporation, and other automotive-related businesses.

Penske also owns the most victories as an owner in the Indianapolis 500; 15 owner victories. A winning racer in the late 1950s, Penske was named 1961’s Sports Car Club of America Driver of the Year by Sports Illustrated. After retiring from driving a few years later, he created one of the most successful teams in IndyCar Series and NASCAR racing. He is also known by his nickname of “The Captain”.

Starting in 1958, Penske purchased, raced and sold race cars, and was very successful both financially and on the track. Penske made his first professional racing start at the now-abandoned Marlboro Motor Racewayin Upper Marlboro, Maryland.

By 1960, he was a well-known race car driver (Sports Illustrated SCCA Driver of the Year), winning prestigious races until 1965, when he retired as a driver, to concentrate on his first Chevrolet dealership in Philadelphia, PA.