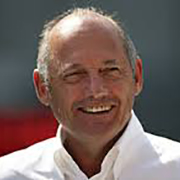 Ronald “Ron” Dennis CBE (born 1 June 1947) is a British businessman, Formula One Team Principal and is an Official British Business Ambassador. Dennis is the Global Consultant for Minsheng Investment Group and also owner of Absolute Taste. He is most well known for his role as owner, CEO, chairman and founder of McLaren Technology Group which houses a Formula 1 team, Technology Company and more.

Since 1981, Dennis has been the team principal of the McLaren Formula One team, and was instrumental in transforming the outfit into a regular world championship contender. Constructors’ and drivers’ world championships were won with Niki Lauda, Alain Prost, Ayrton Senna, Mika Häkkinen and Lewis Hamilton.

After being handed a 3 page business plan by a chef for his Formula One team, he set up a catering company, Absolute Taste, today retaining 55% of the company.

In January 2007, Dennis sold half of his 30 percent shareholding in the McLaren Group to the Bahrain Mumtalakat Holding Company, leaving him with a 15 percent share. In 2009, Dennis, together with co-owners Mansour Ojjeh’s TAG Group and the Bahraini Mumtalakat Holding Company, bought back Daimler AG’s 40 per cent shareholding in a deal that was concluded in 2011. As of January 2014, Mumtalakat hold 50 percent of the Group’s shares, with Dennis and Mansour Ojjeh holding 25 percent each.

Aside from McLaren Group, he is also one of six British business persons to be an official British Business Ambassador for advanced engineering and manufacturing. Dennis is also a main trustee for Tommy’s, a miscarriage help charity. He is the Global Consultant for the state owned China Minsheng Investment Group and also the chairman for the UK Summit.