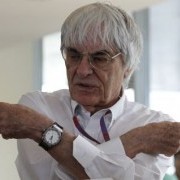 Bernard Charles “Bernie” Ecclestone (born 28 October 1930) is a British business magnate. He is the chief executive of the Formula One Group, which manages Formula One and controls the commercial rights to the sport, and part-owns Delta Topco, the ultimate parent company of Group. As such, he is generally considered the primary authority in Formula One racing and is most commonly described in tabloid journalism as “F1 Supremo”.

His early involvement in the sport was as a competitor and then as a manager of drivers Stuart Lewis-Evans and Jochen Rindt. In 1972, he bought the Brabham team, which he ran for fifteen years.[11] As a team owner he became a member of the Formula One Constructors Association. His control of the sport, which grew from his pioneering the sale of television rights in the late 1970s, is chiefly financial, but under the terms of the Concorde Agreement he and his companies also manage the administration, setup and logistics of each Formula One Grand Prix, making him one of the richest men in the UK, according to his net worth. Ecclestone entered two Grand Prix races as a driver, during the 1958 season, but failed to qualify for either of them.