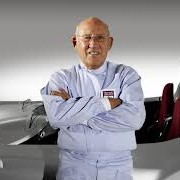 Sir Stirling Craufurd Moss, OBE (born 17 September 1929) is a British former Formula One racing driver. An inductee into the International Motorsports Hall of Fame, he achieved success in several categories of competition and has been described as “the greatest driver never to win the World Championship”

Moss, who raced from 1948 to 1962, won 212 of the 529 races he entered, including 16 Formula One Grands Prix. He would compete in as many as 62 races in a single year and drove 84 different makes of car over the course of his racing career, including Cooper 500, ERA, Lotus, Maserati, Mercedes-Benz, Porsche and Vanwall single-seaters, Aston Martin, Maserati, Ferrari, Jaguar and Mercedes-Benz sports cars, and Jaguar saloons. Like many drivers of the era, he competed in several formulae, often on the same day.