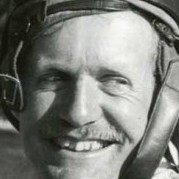 De Graffenried began his racing career in 1936, driving his own Maserati voiturette. Some of his most memorable results came at his home track: the challenging, cobbled, street circuit at Bremgarten near Bern. He won the 1949 British Grand Prix, a year before the FIA World Championship began. In that inaugural year de Graffenried contested five of the season’s seven races, with mixed results. He continued to drive in occasional races over the next six years, with his best finish being fourth place at the 1953 Belgian Grand Prix.

Following his retirement from racing, de Graffenried managed his car dealership in Lausanne, featuring Alfa Romeo, Rolls-Royce and Ferrari automobiles. He also acted as stunt double for Kirk Douglas during the filming of The Racers. Later, he became a common figure at Formula One events during the 1970s and 1980s as the corporate ambassador for Phillip Morris’ Marlboro cigarette brand.

In recognition of his win at the first British Grand Prix, de Graffenried made his last appearance at the wheel of a racing car during the 1998 celebrations of Silverstone’s 50th anniversary at age 84. At the time of his death he was the last surviving starter from the inaugural Formula One World Championship race, the 1950 British Grand Prix, following the death of Eugène Martin three months previously.