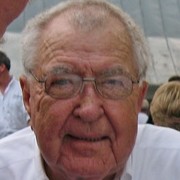 Carroll Hall Shelby (January 11, 1923 – May 10, 2012) was an American automotive designer, racing driver and entrepreneur. He was best known for his involvement with the AC Cobra and later the Mustang-based performance cars for Ford Motor Company known as Shelby Mustangs which he had done since 1965. His company, Shelby American Inc., founded in 1962, currently sells modified Ford vehicles, as well as performance parts.