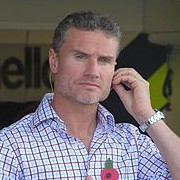 David Marshall Coulthard, MBE (/ˈkoʊlθɑrt/; born 27 March 1971), known as DC, is a retired British Formula One racing driver from Twynholm, Scotland. He was runner-up in the 2001 Formula One World Drivers’ Championship, driving for McLaren.

Coulthard began karting at the age of eleven and achieved early success before progressing to car racing in the British Formula Ford Championship and the Formula 3000 series. He first drove in Formula One with Williams F1 in the 1994 season succeeding the late Ayrton Senna. The following year he won his first Grand Prix in Portugal, and then for the 1996 season he moved to McLaren. After winning two races in the 1997 season, he finished 3rd in the World Drivers’ Championship in the 1998 season.

He won five races throughout 1999 and 2000 before finishing 2nd in the Drivers’ Championship to Michael Schumacher in 2001. Two more victories followed between 2002 and 2003 before he left McLaren at the end of 2004. He moved to Red Bull in 2005 and secured their first podium a year later. Coulthard retired from Formula One racing at the end of 2008.

After retiring from Formula One Coulthard continued working with Red Bull as a consultant and joined the BBC as a commentator and pundit for their coverage of Formula One. He returned to active motorsports in 2010 joining Mücke Motorsport in the Deutsche Tourenwagen Masters and retired at the end of 2012. Coulthard has also participated in the Race of Champions, finishing runner-up in the Drivers’ Cup in 2008, and winning the competition in 2014.