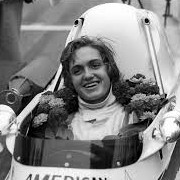 Edward “Eddie” McKay Cheever, Jr. (born January 10, 1958 in Phoenix, Arizona) is an American racing driver who raced for almost thirty years in Formula One, sports cars, CART and the Indy Racing League. Cheever participated in 143 World Championship Formula One races and started 132, more than any other American, driving for nine different teams from 1978 through 1989. In 1997, he formed his own IRL team and won the 1998 Indianapolis 500 as both owner and driver. The team now competes in sports cars.

He made his Formula One debut at age 20 in 1978. After failing to qualify in Argentina, he made the grid at Kyalami for the South African Grand Prix in a Hesketh-Ford. An engine problem forced him to retire after just eight laps. Two seasons later, he became a regular driver for the Osella team, but finished only once in ten races. Switching teams repeatedly as he tried to climb his way up the grid, Cheever had five points-scoring finishes for the Tyrrell team in 1981, and three podiums for Ligier the following year, including a second place at the 1982 Detroit Grand Prix in Detroit.

Cheever driving for Alfa Romeo at the 1985 German Grand Prix.

Cheever driving his 1988 Arrows A10B-Megatron at the 2008 Goodwood Festival of Speed.
The 1983 season proved to be Cheever’s high point in Formula One. He signed with the factory Equipe Renault team alongside Frenchman Alain Prost, both of whom were among the year’s Championship favorites. Cheever earned four more podiums and 22 Championship points driving the Renault RE30, but the team’s disappointment after losing both the Drivers’ (Prost) and Constructors’ titles late in the season brought about the replacement of both Cheever and Prost. His best finish for Renault was second in the Canadian Grand Prix at the Circuit Gilles Villeneuve in Montreal, while earlier in the season he achieved his highest career qualifying position when he was second to team mate Prost at the French Grand Prix at the Paul Ricard Circuit. Unconfirmed rumors had Renault signing Cheever as the French manufacturer was looking to sell more cars in North America, and having an American driver in the factory backed Formula One team would help that cause (there were three F1 races in North America in 1983 – Long Beach, Detroit and Canada).

In six more seasons, he never drove another truly competitive F1 car. After leaving Renault, Cheever had two unsuccessful seasons with Alfa Romeo as team mate to Italian Riccardo Patrese. The thirsty and underpowered 890T V8 turbo engine used in the Alfas generally saw results few and far between, though it was generally believed Cheever outperformed his teammate despite failing to qualify for the 1984 Monaco Grand Prix. Patrese though scored the only podium finish for the team in those two years when he finished third in the 1984 Italian Grand Prix. Cheever had been 3rd with 6 laps remaining but his Alfa ran out of fuel, handing the place to Patrese (the team had set Cheever’s 890T engine for speed while setting Patrese for an economy run in the hope of a good finish). 1985 wasn’t helped by the team’s car, the Alfa Romeo 185T, which proved to be extremely uncompetitive, forcing the team to upgrade its 1984 car, the 184T to 1985 specifications and use it for the last half of the season, though the old car did not improve results despite proving slightly faster as the fuel issue remained. Late in the 1985 season, Alfa announced they were pulling out of F1 at the end of the year, leaving Cheever without an F1 drive, while Patrese went back to Brabham in place of Nelson Piquet, who was moving to Williams.

While racing in the World Sportscar Championship for Tom Walkinshaw Racing’s Jaguar team, Cheever raced in only one F1 Grand Prix in 1986. This was for the American owned and sponsored Haas Lola team at Detroit, as a replacement for the injured Patrick Tambay. Cheever actually qualified the unfamiliar Lola THL2 with its turbocharged Ford V6 engine in 10th position. Regular team driver, 1980 World Champion Alan Jones, could only qualify his car 21st. Both Lola’s retired with steering damage in the race, Jones on lap 33, Cheever 4 laps later. Ironically, Cheever was only the third choice to replace Tambay for the race. Team owner Carl Haas had originally asked the lead driver in his CART team, 1978 World Champion Mario Andretti to drive. Mario declined however, but recommended his son Michael as a replacement. However, when Michael was unable to obtain a FIA Superlicence for the race, Haas turned to the experienced Cheever, who quickly agreed to an F1 comeback.

For 1987, he was signed by Arrows team boss Jackie Oliver to partner British driver Derek Warwick (Cheever’s appointment coincided with the US based USF&G financial group becoming the team’s major sponsor). Cheever and Warwick (who had been teammates at TWR the previous year) were evenly matched and would have many on-track battles throughout 1987 and 1988. He secured the third place at the 1988 Italian Grand Prix at Monza; at one stage, he was almost disqualified when his Arrows A10B’s 150 liter fuel tank was found to actually contain 151 liters. Luckily, further examination revealed the tank size to be 149 liters and his third place stood. The podium cost him a new pair of sunglasses for the chief mechanic. Monza, won by the Ferrari of Gerhard Berger, was the only time the McLaren-Hondas of Alain Prost and 1988 World Champion Ayrton Senna did not win a race in 1988. Cheever’s third place in the 1988 Italian Grand Prix was also the final podium for the turbocharged l4 BMW M12 engine (badged as “Megatron” in 1987 and 1988). At the time, it was the oldest turbo engine in use in Formula One, having been first used by the Brabham team in 1982.

His final podium finish came at the 1989 United States Grand Prix in his home town of Phoenix, where he was involved in a race long battle with the Williams-Renault of former Alfa Romeo teammate Riccardo Patrese for 2nd place, but then had to give way at the later stages of the race when his brakes started to fade (he claimed that one of his front brakes had actually stopped working). Cheever’s last race in Formula One was at the very wet 1989 Australian Grand Prix in Adelaide. During the last seconds of qualifying, he got out of shape coming out of the Fosters Hairpin onto the pit straight and clouted the wall hard with his Arrows A11-Ford, destroying the rear of the car. In the race he was the last to retire, spinning off on lap 42 after driving for many laps with another car’s front wing lodged in his Arrows’ sidepod.

During his final season in Formula One, Cheever remained one of the best racers in the business (when he finished, his average finishing place was 7th), but he became increasingly bemused by his inability to qualify well (his average qualifying position was 23rd, compared to Warwick’s 14th). His best qualifying position for the season with 16th in both Canada and Hungary, and he even failed to qualify for the British Grand Prix at Silverstone and the Italian Grand Prix at Monza, where he had finished 3rd the previous year.

In all, he participated in 143 Grands Prix, achieved 9 podiums, and scored a total of 70 championship points. His best year was 1983, when he finished 7th in the championship, scored three podium finishes and one front row start for Renault.