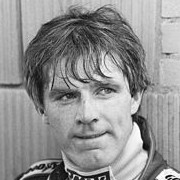 Derek Daly (born 11 March 1953 in Ballinteer, Dublin) is a former racing driver from Ireland. He won the 1977 British Formula Three Championship, and competed as a professional racing driver for 17 years participating in 64 World Championship Formula One Grands Prix, debuting on 2 April 1978. He scored a total of 15 championship points. He also participated in several non-Championship Formula One races. Daly later became a US citizen and now resides in Noblesville, Indiana with his third wife, Rhonda, and three children from his second marriage.

In 1990, Daly had the unusual result of finish both first and second at the 12 Hours of Sebring, driving for Nissan.

Daly is known in motor sports circles around the world as a driver, writer, broadcaster, racing advisor, and businessman. He runs a professional services company called MotorVation, and had been a commentator for American broadcasts of the Champ Car series, as well as a public speaker. One of the agencies that represents him is the National Speakers Bureau.

He was also part of the ESPN Speedworld Coverage of the Grand Prix of San Marino in 1994, and therefore called the race in which Ayrton Senna was killed.

Daly’s son, Conor Daly, is also a racing driver, starting in GP3 driving for the Lotus GP team in 2012, and then continuing on to GP2 in 2014 driving for Venezuela GP Lazarus.