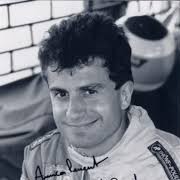 Yannick Dalmas (born 28 July 1961 in Le Beausset, Var) is a former racing driver from France. He participated in 49 Formula One Grands Prix, debuting on 18 October 1987, but qualified for only 24 of them. His best result in F1 was a 5th place at the 1987 Australian Grand Prix, but he was not eligible for World Championship points at that race. His F1 career was blighted by his health issues, towards the end of 1988, Dalmas was diagnosed with Legionellosis which caused him to miss the final two races. He recovered before the start of 1989 but his illness had clearly affected him.

In 1994, Dalmas made a brief return to Formula One with cash-strapped Larrousse, but only entered two races. He crashed in Italy, and finished two laps off the lead in Portugal.