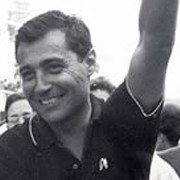 A racing car originally owned by Guichet sold at auction recently for over 15 million dollars.[1] He previously owned one of only thirty-six Ferrari 250GTO Ferrarissima cars ever produced, originally created by Enzo Ferrari in 1966. The price he got for the car when it was sold in 1967 was $4500.