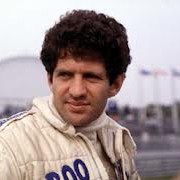 He rapidly ascended to the ranks of Formula One after moving to Britain in 1970. His Formula 1 debut occurred at Watkins Glen in 1972 with McLaren where he ran as high as third place before spinning and finishing ninth. Immediately becoming a name to watch, he continued his development the following year, winning the 1973 SCCA L&M Championship and racing five times in F1. In France, he almost won in his third start in F1 before crashing into Emerson Fittipaldi, the reigning World Champion, who said after the crash about Scheckter: “This madman is a menace to himself and everybody else and does not belong in Formula 1.” In his next start, the British Grand Prix at Silverstone, Scheckter was involved in a big accident which took nearly a dozen cars out of the race. The Grand Prix Drivers Association demanded his immediate banishment, which was only put off when McLaren agreed to rest their driver for four races.[2] Scheckter’s McLaren M23 bore the number zero during the Canadian and American Grands Prix of 1973. Scheckter is one of only two F1 drivers to compete under this number, the other being Damon Hill. During the practice for the American event at the Watkins Glen circuit, Frenchman François Cevert, who was to be Scheckter’s Tyrrell teammate for 1974 was killed in an appalling accident at the fast uphill Esses corners. Scheckter was behind Cevert when he crashed, and Scheckter stopped his McLaren, got out of his car and attempted to get Cevert out of his destroyed Tyrrell; but the 29-year-old Frenchman had been cut in half by the circuit’s poorly installed Armco barriers and was already dead. This left an indelible mark on the South African, and it caused him to abandon his reckless ways, and he become more mature as a result of witnessing Cevert’s destructive accident.

Scheckter in the iconic Tyrrell P34.
Tyrrell in 1974 gave him his first full-time drive in F1. Jody rewarded them with a third-place finish in the drivers’ championship and a pair of wins in Sweden and Britain. During the year, he scored points in eight consecutive races, one of the longer scoring streaks of the time. A slight off-year followed, although he did become the only South African to win the South African Grand Prix, but his third year with the team in 1976 gave him another third place finish in the drivers’ championship. In that season, Tyrrell introduced the most radical car in F1 history, the six-wheeled Tyrrell P34. Scheckter gave the six-wheeler its only win on Sweden’s Anderstorp circuit and in his twelve races with the car, he scored points ten times. This included a thrilling race-long battle for the lead in the American Grand Prix between himself and his great friend James Hunt.

Scheckter left for Walter Wolf’s new team in 1977 and Scheckter gave the team a win in its maiden race. He won twice more with the team and was often on the podium, but finished second on points behind a more dominant Niki Lauda. A seventh-place finish with the team in 1978 followed and he left the team after the season to join Ferrari to partner Gilles Villeneuve in the team’s ground effect 312T4 car.