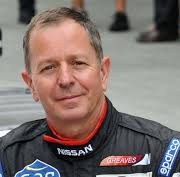 Brundle contested the British Formula Three Championship in 1983, finishing a close second to Ayrton Senna, and the two progressed to Formula One the next year. Brundle failed to score a victory at the top level of single seater racing, but he has been successful in other disciplines. He was the 1988 World Sportscar Champion, with a record points score, and won the 1990 24 Hours of Le Mans race for Jaguar Cars in a Jaguar XJR-12.

His Formula One career began with the Tyrrell Racing Organisation in 1984. He put in a number of aggressive and fast drives, finishing fifth in his first race in Brazil and then second in Detroit. At the 1984 Dallas Grand Prix Brundle broke his ankles and both feet in a crash during a practice session, and was forced to miss the rest of the season while he recuperated; the severity of the damage to Brundle’s left ankle would leave him with permanent injuries, preventing him from running and left-foot braking. Later in the year Tyrrell were disqualified from the World Championship due to a technical infringement and Brundle’s achievements for that season were wiped from the record books.

For the next two seasons he remained with Tyrrell, and despite the team’s switch from the Cosworth DFV to the turbocharged Renault engines in mid-1985, the team struggled against the works teams. He scored only eight points in his time with Tyrrell, all in the 1986 season. In 1987 he left Tyrrell and moved to the struggling West German team Zakspeed, but scored only two points during the year; both were scored for finishing fifth at the 1987 San Marino Grand Prix. The Zakspeed 871 car was unable to compete with the front runners. The two points scored by Brundle in 1987 were the only points the Zakspeed team scored in their five-year (1985–89) run in Formula One.