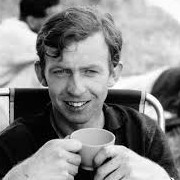 Charles Anthony “Tony” Standish Brooks (born in Dukinfield, Cheshire, 25 February 1932) is a British former racing driver from England also known as the “racing dentist”. He participated in 39 Formula One World Championship Grands Prix, debuting on 14 July 1956, achieving six wins, 10 podium finishes and 75 career points. He also scored the first win by a British driver in a British car in a Grand Prix since 1923, in 1955 driving a Connaught at Syracuse in a non World Championship race.

Brooks was born on 25 February 1932 in Dukinfield, Chesire. He is the son of a dental surgeon, Charles Standish Brooks, and studied the practice himself. He is also a cousin of Norman Standish Brooks, a former British Olympic swimmer. He took up racing in 1952 and drove a Healey and a Frazer Nash at club events until 1955. In that same year, Brooks drove a Formula Two Connaught at Crystal Palace and finished fourth.

In 1959, Brooks, together with Brabham and Moss, had a chance to win the title due to the retirement (and subsequent death in a road accident) of Mike Hawthorn and the death, the previous season, of Peter Collins. Brooks started well, with a second place at Monaco, behind Brabham. He failed to finish at the Dutch Grand Prix, but dominantly won the French Grand Prix at Reims. Having failed to finish in a Vanwall at the British Grand Prix which he drove due to Ferrari workers in Italy being on strike, he won the only German Grand Prix of Formula One to be held at AVUS. The race was split unusually into two heats, and he won both. He had a slow car in Portugal, qualifying 10th and finishing 5 laps down. He retired shortly after the start at Monza but was still in contention to win the championship. At the first ever United States Grand Prix for Formula One at Sebring, he was hit by German team-mate Wolfgang von Trips and pitted to check for any damage, losing two minutes. It proved to be a waste of time, but still finished in third place. He finished second in the championship with 27 points, 7 behind Brabham, and 1.5 ahead of Moss.

Brooks won six races for Vanwall and Ferrari, secured four pole positions, achieved ten podiums, and scored a total of 75 championship points. He drove for BRM but retired from the team at the end of 1961, just before their most successful season. He ended his career with a third place at the first ever United States Grand Prix at Watkins Glen.

Tony Brooks parked outside the 1957 Le Mans Aston Martin base, the Hotel de France, at the wheel of his DBR1 race car.
He was also an accomplished sports car driver, winning both the 1957 1000 km Nürburgring and the 1958 RAC Tourist Trophy, with co-driver, Stirling Moss, racing an Aston Martin DBR1. He was less successful at Le Mans, in 1957 an accident, again racing an Aston Martin DBR1, at that years 24 hour race brought about a change in his racing philosophy. A crash in the 1956 British Grand Prix and the subsequent Le Mans crash both occurred in cars with mechanical problems, of which he was aware, and Brooks, being a devout Catholic, vowed he would never again risk his life in a car that was in less than sound condition.